Non-native plants (“weeds” or “exotics”) have been introduced to an area from their native range, either purposefully or accidentally. The term non-native usually refers to plants from other countries, regions, or continents. Water hyacinth (Eichhornia crassipes) comes from South America. Melaluca (Melaleuca quinquenervia) comes from Australia. However, non-native can also mean plants from another region (within the same country). Smooth cordgrass (Spartina alterniflora), a desirable native plant on the U.S. Atlantic coast, is invasive on the Pacific coast, covering oyster beds and other vital habitat.

Approximately 1,400 of Florida’s plants are non-native plants. Many non-natives are not invasive and support human health and economic interests such as crop production and landscaping. These plants are well managed by those who grow them. Most other exotics present only minor problems in highly disturbed areas such as roadsides or along utility corridors. Based on the Florida Exotic Pest Plant Council's (FLEPPC) 2011 List of Invasive Plant Species, only about 11% of the nearly 1,400 exotic species introduced into Florida have become established outside of cultivation and are causing problems.

“. . .a species that is non-native to the ecosystem under consideration and whose introduction causes or is likely to cause economic or environmental harm or harm to human health.”

The National Invasive Species Information Center says “. . .these plants are characteristically adaptable to new habitats, grow aggressively, and have a high reproductive capacity. They are often introduced to a new location without the environmental checks and balances such as seasonal weather, diseases, or insect pests that kept them under control in their native range. Their vigor combined with a lack of natural enemies often leads to outbreak populations.” 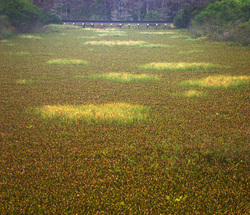 A water hyacinth infestation in Fisheating Creek, Florida. Plants are jammed against a bridge in the far distance — a flood waiting to happen.


According to FLEPPC, “These population explosions can have catastrophic effects, out-competing and displacing the native plants and disrupting naturally-balanced native plant communities.” Destruction and replacement of our native plants by invasive species has several significant consequences. Wildlife that depends on native plants is often unable to adapt and may leave the area or die out. Invasive aquatic plants can completely fill the water, driving fish and wildlife from the area. FLEPPC says “This reduction in biodiversity can adversely impact wildlife and alter natural processes such as fire frequency or intensity and water flow.”

Aquatic invasive plants are especially troublesome in Florida where they can impede navigation and flood control, disrupt recreational water use, and create breeding grounds for mosquitoes. Control of invasive plants in Florida’s natural areas and waterways is expensive, costing millions of dollars each year.